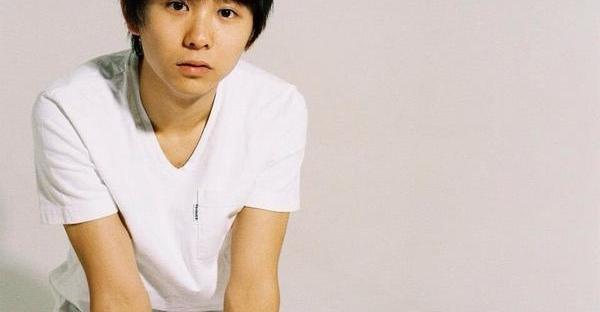 This is going to be the start of my series of posts about the actors and actresses that I follow and love. This is not based on anything, though. Just the people off the top of my head. Of course, they are not only from small and big screens, but also from wide stage. I will start with the ones that I just recently (or not-so-recently) followed. Off the top of my head: Suga Kenta.

Standing 5’5″ tall, Suga Kenta is born on 19th of October 1994. Now, he is under Horipro, the agency holding the likes of Tsuyoshi Abe, Haruka Ayase, Tsumabuki Satoshi, and Ishihara Satomi. He started as a child actor (he’s been acting since 1999!) and is still working now as an actor on screen and on stage.

I first saw Suga Kenta on a picture from a magazine when I was stalking Kamiki Ryunosuke. They were both younger back then. I did not pay that much attention to him, though, because I was focused more on Kamiki. Moreover, I had not seen him in any drama or movie yet. That is, until Gakkou no Kaidan.

Gakkou no Kaidan is a Winter 2015 drama starring Kamiki Ryunosuke and Suzu Hirose. Of course, I initially watched that because of Kamiki, but as I watched the show, there’s this guy who also steals scenes. Obviously, that’s Suga Kenta. He plays the supporting character Aburamori Tetsuo. He is adorable there! He is the president of the student council and a friend of Haruna, the main female protagonist. Aburamori may not be the strongest character there is, but to me, Suga’s acting gave him a strong presence on screen.

They were around 4th to 5th grade here.

Gakkou no Kaidan BTS of these cuties!

The recent TV show I watched of him is a drama series entitled Koibumi Biyori which stars the Japanese girl group E-girls and different actors (notably Hongo Kanata and Horii Arata). Suga is on the second episode entitled, “Love in the Library”. The story is actually simple and rather predictable. I still watched it for him, though. Someday, when he looks more mature, I hope he gets to star in a romance drama, too. Or even if he stars in a high school drama, it’s fine. He has a baby face, anyway. 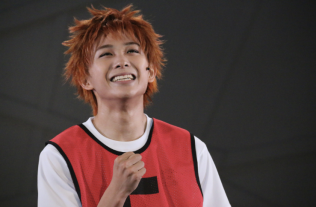 The second time I saw him, I’m ashamed that it took me minutes before I recognized that he was that. The wig was probably a factor, as well as my not expecting that he’s a stage actor. It was on Hyper Projection Engeki Haikyuu!!

He plays as the protagonist Hinata Shoyo. As what is obvious on my previous posts, I love Haikyuu!! so I was a bit apprehensive about watching it adapted on stage. However, at the time, I also wanted to see what a 2.5D stage play is. In the end, I watched it and I’ll never regret watching it.

In my opinion, he managed to embody Hinata very well. His delivery of lines, actions, and even smiles, they’re all like Hinata’s. I bet the fact that he is actually a fan of the manga series helped him create the role. He said that he followed the manga from when it was still a one-shot. I love that he is such an energy ball on and off stage (based on the interviews and backstage footages)! He also managed to lead his co-actors well. 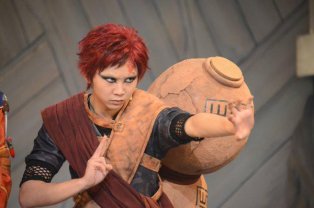 His other well-known stage play is Naruto Stage Play. He played as Gaara. I haven’t actually watched the whole thing yet, but from the footages I’ve seen all over the net, I think he did a good job. (Kimura Tatsunari was also there as Kabuto, so I really plan on watching it.)

Lately, he’s getting more roles on screen and I’m glad for him. (There’s going to be a third stage play for Haikyuu!! featuring Karasuno and Seijo’s match soon!) He’s one of the better actors out there, so I hope he gets more recognition. He deserves so much more love. 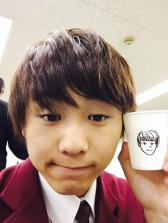 Whenever I see his baby face on screen, I want to pinch his cheeks! He is such an adorable guy and from what I’ve watched of him, he seems to be a fun guy to be with. His facial expressions on different self or group pictures are gold! I love seeing videos of him fooling around with his co-actors because it’s obvious that he’s genuinely having fun. There’s also the feeling that he’s respected by his peers. (Of course, can’t confidently declare this because I don’t know him personally. Just saying based personal observations and all.) I follow him on Twitter and Instagram because he also takes nice photos. (And he takes lots of photos with his co-stars. Sometimes, he posts amusing pictures. Like, he edits and puts the faces of the people absent for the group pictures. Haha)

I am so excited for what this little ball of sunshine can show and perform this year!

Late August last year, I sent fan letters addressed to him, Kimura Tatsunari, Miura Kairi, Kosaka Ryotaro, Ino Hiroki, and Asuma Kousuke (basically some members of the Engeki Haikyuu cast) through a proxy. (See how much I love them?) Even if I know I won’t get a reply, I’m happy just to show that someone from outside their country supports them.