The Summer 2013 lineup has this anime which makes it feel like it’s really summer. 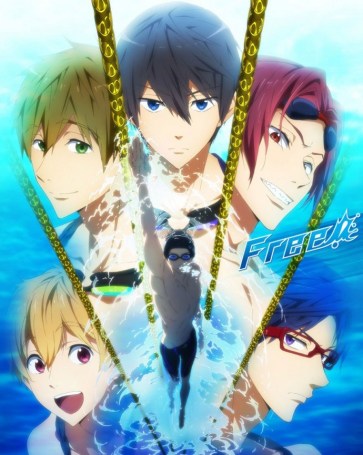 From the studio that introduces lots of moe characters is this anime which seems to prove that they are not all moe; they are able to show us lots of biceps, triceps, and six pack abs. This anime which became a hype is Free! Iwatobi Swim Club. It was actually a hype already even before the anime was announced. It all started with this 30-second CM. All sorts of fan arts and fan fictions came out based on that.

Four boys named Haruka, Makoto, Nagisa, and Rin all participated in a swimming tournament shortly before graduating elementary school and later parted ways. Years later, they reunite when Rin challenges Haruka to a race and wins. Not wanting to be defeated so easily, Haruka gathers Makoto and Nagisa and a new recruit named Rei to form the Iwatobi High School Swimming Club.

My first encounter with Free! is when I was still kind of actively lurking DeviantArt. I stumbled across this anime dating sim. Of course, I played it and too bad it hasn’t been updated for years (I actually just checked it again now). Then, my dash on Tumblr became filled with lots of posts about it. That was when the anime was not yet confirmed. Actually, some even believed that it wouldn’t turn into an anime. But we all know that Animation Do and Kyoto Animation actually brought it to life.

According to MAL, I started watching the anime on June 2014, but I put it on hold after two episodes. I just picked it up the other day to watch and I was surprised I finished it in a day.

Free! is considered a sports anime, but I feel like it’s leaning more on the slice of life genre. Yes, there are training camp, practices, and all, but the amount of drama is so much more than I expected. I couldn’t help but laugh because of it. Not that it’s all bad. Their friendship is good and all. I just think that the plot is quite… generic?

There are certainly lots of abs, though. From the first to the last episode, there are fan services around. The animation is beautiful, especially whenever they are swimming. Usually, the sight of abs, real or animated, disturbs me, but thankfully, the character designs here did not bother me. Anyway, this sure is a feast especially to the fujoshi fans out there. Seriously, I have never seen a group of guys as clingy as they are.

Anyway, the characters are enjoyable to watch. They all fall under certain character tropes. Gathered together, they create an environment that’s fun to watch despite how predictable some things may be. 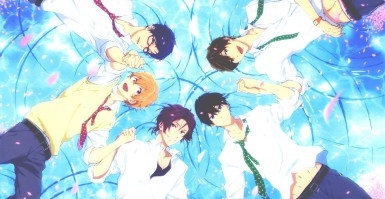 Nanase Haruka is the silent, passionate type of guy. He likes water a lot, to the point that even if he just saw an aquarium, he would strip. But he doesn’t care about other things except swimming/water and his friends. I think he is so adorable. Judging his image alone, I thought he would be a jerk, but it turns out he’s like Daiya‘s Furuya.

Then, Tachibana Makoto is the mother of the group. Understanding, patient, and responsible, he manages the group. Hazuki Nagisa is that hyper character who moves a lot and plans a lot, most of which are for fun.

Of course, there’s Matsuoka Rin, their childhood friend who decided to go away to pursue his dream. He becomes Haru’s rival of some sort. All the drama stems from him and his relationship with the group.

The addition of Ryugasaki Rei is good. I thought that his character is the most funny and interesting of them all, too. I knew he would be the type who thinks rationally, but I never thought that he is one to care so much about beauty. He isn’t a snob nor arrogant, too. He even obeys his seniors. I was pleasantly surprised by his character and I couldn’t help but grin whenever I see him.

Another notable character is Matsuoka Gou, Rin’s younger sister. I think she is the representation of everyone in the fandom. I like that she isn’t just any timid character. She does her job as a manager very well. She even reminded me a bit of KuroBasu‘s Riko, though Riko doesn’t even bat an eye whenever she sees their players’ bodies. Anyhow, I loved Rin and Gou’s relationship with each other. They show how much they care for each other with their every interactions. I initially thought that Rin would be the type who snaps at his sister, but I’m glad he isn’t. Those two are adorable! (Ugh. Why don’t I have an older brother?)

The OSTs are fine. The OP “Rage On” by OLDCODEX sounds catchy to me and I usually sang along with the “Rage on mabushii hikari” part on the intro. The ED “SPLASH FREE”, used for ep1-11 and “EVER BLUE”, which was used in ep12, are sang by STYLE FIVE, the group formed by the seiyuu of the main characters. Their voices are good.

Overall, I enjoyed this, mostly because of the animation and the characters’ interactions. However, for someone looking for intense plays which are usually seen on sports anime series out there, I think this is a bit of a letdown. (Or at least it was for me.) I hope Eternal Summer will be fun, too, and better.