Nowadays, I feel like there is an increasing number of drama adaptations of manga series though even before, a lot are existing. Some of the most popular ones — Hana Yori Dango and Itazura na Kiss, just to name two — are even adapted in China, Taiwan, and Korea, too. (Kanojo wa Uso o Aishisugiteru has its Korean drama adaptation ongoing this season.) Now, I’d like to talk about the drama adaptation of one of my favorite manga series — Skip Beat!

Skip Beat! is a shoujo manga by Nakamura Yoshiki. It is published by Hakusensha in the Hana to Yume magazine. The anime adaptation of the series was part of the Fall 2008 lineup. This drama adaptation, which is also known by the title Extravagant Challenge or Glamorous Challenge, aired from December 18, 2011 to April 1, 2012 with 15 episodes.

Gong Xi sacrificed her life to support her boyfriend, Bu Puo Shang, so he could become a successful singer. One day, Shang suddenly breaks up with Gong Xi, leaving her with nothing, and Gong Xi vows revenge. She decides to delve into the entertainment world and become even more successful than Shang to get back at him. Gong Xi therein meets Dun He Lian, another actor in her agency, who helps motivate her to become a top entertainer. (Source: dramawiki)

I actually just read that summary. It claims that Shang (Sho) is Gong Xi’s boyfriend when all the time I’ve been watching this, it doesn’t look that way. Gong Xi (Kyoko) just foolishly loves him so much, just as in the original source. But if that summary came from an official source, then I cannot argue with it, can I?

Anyway, the plot is still the same with some tweaks here and there. I’ve got to give it to the writers for the effort to stick close to the material. They included even some of the ridiculous scenes (the turtle scene, anyone?) which add to the comedic side of the drama. . Kyoko’s demons are even included, but I wish they gave more effort animating them.

The ending is left open, inviting questions, but I guess it’s because the manga was (and still is) ongoing, However, I think it’s wrapped up much nicely that it does not feel irritating that we are left to think what could happen. (Or at least for me?)

Ivy Chen portrayed Gong Xi. I think her acting is decent, though she had some expressions which looked unnatural… or quite not right. But I guess that is all because of the way things are shown in the story is really exaggerated. That’s easily adaptable in animation, but it will always be a challenge when adapted for live actions. 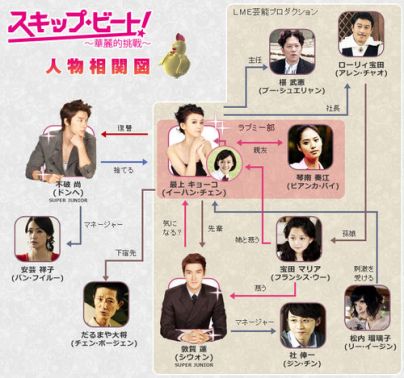 Choi Siwon acted as Dun He Lian while Lee Donghae acted as Bu Puo Shang. When I watched this back in 2012, I had not much expectations from them. I do love them, but I only saw them as singers and dancers of Super Junior. I was surprised when I finally got to see their acting. Their acting isn’t mind-blowing or jaw-dropping, but they were acting all right. Though Siwon didn’t show a menacing or scary enough Lian, at least showed varied emotions. (He’s so much commendable now, though. He’s such a loveable dork in She Was Pretty!) Donghae, with all his adorableness, showed a truly likable Shang because of his portrayal, though I thought he didn’t have that much air of pride as he should have had. Anyway, it’s such a bummer that their voices were dubbed.

Bianca Bai played as Jiang Nan Qin (Moko). I think she played the character well. I loved seeing her character interact with Gong Xi because the actresses look natural together. They are adorable!

I also loved how King Chin portrayed Mr. Du (Yashiro), Dun He Lian’s manager. I think I loved the character more because of him. He’s perkier than in the manga and anime. I enjoyed his teasing Ren here more than in the anime.

Luo Li (played by Allen Chao) has less impact here, but I appreciate the effort of showing the quirkiness of the President. Meanwhile, I commend Wu Zhao Xian who acted as Maria. She isn’t as bratty as the Maria in the original source, but she’s just as sweetheart as that one. The other actors and actresses’ acting range from poor to good.

What made my head scratch out of all the characters is the two random characters (guards?) who are just for laughs, flat characters which the drama could survive without. Oh well…

I love all the songs in this drama. The opening song, “S.O.L.O.” performed by Super Junior-M, is catchy gives a good vibe, exactly like a good beginning. The ending song, entitled “That’s Love” and is sang by Donghae and Henry (SuJu-M), gives me a nostalgic feeling, just the right emotion I feel whenever something is coming to a close. The other insert songs and some instrumentals are placed just at the right moments to enhance the feels of the scenes and I love listening to each one of them.

In all honesty, I couldn’t remember how many times I’ve re-watched this series already. I think I’ve been re-watching this every year since 2012. Anyway, each episode is around 1 hour so I guess it’s not really that wise to re-watch, but I do it whenever I’m in a drama slump.

This drama is fun to watch, especially if one is able to disregard the exaggerations and some poor animation and acting. Recommended to Siwon and Donghae’s fans, too. Oh, and to some fans of the series who don’t mind live actions.

Before this drama came about, a lot of drama happened in the back scene. On the start of the year 2008, there was already news about this drama. Ariel Lin, Jerry Yan, and Joe Cheng were casted to be Gong Xi, Lian, and Shang, but problems arose. Disagreements, financial problems, and, finally, schedule conflicts. In a span of 3 years, these happened, so the three originally chosen actors dropped out of the scene one by one. Ariel was so close to doing it with Siwon and Donghae (who were then finally casted), but when the production for this drama was to start, it happened to be in conflict with In Time With You (well, at least she rocked that with Chen Bolin) which she already signed up for. (Wu Chun was close to being involved with the drama to play as Lian, too, but problems happened.)

Considering that this drama was aired 2011, I don’t think Ariel would fit Gong Xi, anyway, because the character is just 21 years old. (What a gap with Ariel’s character age in ITWY. Haha!) I think she would still pass for the role had the original plan on 2008 was pushed through, but then it wasn’t. So we got what is currently available. And it isn’t all bad. I just wonder what it would have been like had the original cast wasn’t changed.

Anyway, I wonder if there aren’t any plans for a Japanese adaptation of this one, though I’d love a second season of the anime more. I’d love to see the Dark Moon arc as well as Beagle animated! (Especially Beagle!)