This post has been on the drafts gathering virtual dusts for months now. Currently, Act II already has 76 chapters. My view about certain things changed because of the development in the story and because of some realizations, so I had to heavily edit the original post. This led me to the decision to make this a series of posts. Anyway, I want to say some things for each one of them, so this would have been a looong post had I not cut it to different parts.

From this school comes the protagonists of the series. A lot of happenings are shown on their training grounds and in the dorm and cafeteria. From Act I to Act II, the first string had six different sets of members so far.

Sawamura Eijun is the main protagonist of the story. The story starts with him being scouted to enter this school and as he enter here, he finds himself facing many trials, realizing that the path to his goal — to be the ace of the team — is not easy. Everything that he has to go through is a step building up to him being a more reliable pitcher.

He is known for his strong will, which allows him to pursue what his eyes set on doing, as well as his hardworking nature. He has the capability to positively influence the people around him. His usual energy is sometimes a bit annoying, but most of the time energizing. Nevertheless, we cannot deny that his energy causes the atmosphere to change. He is also adorable! He is adorable when he runs as practice and bunts and gets on base and pitches (I love his catchphrase and his habit of inhaling-exhaling lots to calm down) and gets serious… HE IS JUST SO PRECIOUS AND LOVEABLE!

I feel so bad thinking that he doesn’t get what he deserve. Sawamura is a comic relief in a lot circumstances. He is heard shouting from the dugout or from the bullpen during the times he isn’t on the mound. Those are instances which may make the fans love him even more, but that still do not erase the fact that many times, he is shunned to the side. He is a comic relief to show that ‘hey, the MC’s still here!’. Then again, perhaps this is Terajima-sensei’s way of showing the step by step growth of Sawamura. Every time Sawamura gets on the mound, he is different.

I do love it when the other characters are not only one-dimensional, when they are given backstories and all, but I was frustrated because I also wanted to see more of him because he is a lot more fun and interesting pitcher. I enjoyed watching the times whenever he is sent on the mound to pitch because those are also the times when all the other members get more screen time. (He pitches to contact, so…) His reliance on his team mates makes him shine.

In the recent manga updates, he is getting more and more recognition and I hope Terajima-sensei won’t suddenly drop the mood again. 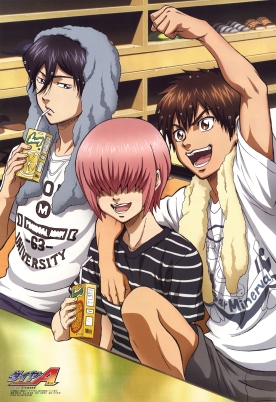 Anyway, another pitcher who shares the spotlight is Furuya Satoru. On the same year as Sawamura, he is a pitcher who pitches powerful fastballs that make him gain lots of attention. He is Sawamura’s main rival for being the ‘Ace’. Being tall and dark-haired, at first he reminded me of Kageyama (Haikyuu!!) and Imaizumi (Yowamushi Pedal), but eventually I realized that his character is completely different from them. Furuya may be naturally gifted, but he is not loud. In contrast, he does not talk much but is straightforward whenever he speaks and he expresses what he wants, though more intensely through his body aura (which I actually find adorable). He can be a bit of an oddball as well. (His “stamina roll” is adorable. Haha.)

A lot of people have an issue about his hogging the spotlight from Sawamura and I admit that it did irk me whenever the show seemed to rub in my face that he is ‘better’. Yes, from the start, it has been made clear that he is more capable of playing both offense and defense than Sawamura. His fast and heavy pitches are also more capable to do three for three’s, but he is also still lacking in different aspects. Stamina and control (thus his “staminaroll”) still has to be developed. Moreover, he is still inconsistent. Whenever he is doing good, he can be untouchable, but whenever he isn’t, he can also be so bad.

It frustrates me that Furuya is overpraised when Sawamura usually gets the ‘unbelievable!’ looks from people (not saying all but majority of the people), constantly hearing that he just got lucky or the like. As if they didn’t see that he is capable of good plays. Sawamura may not be as good as Furuya in batting (he’s good at bunts, though) but he can be reliable as well. Let me make this clear, though: I do not hate/dislike Furuya. Maybe if Furuya were a more interesting character and had an evident superior ability than Sawamura, I wouldn’t mind the hype his team mates, the coaches, reporters, and other people are giving him. (Then again, maybe that 153 km/h pitch is that seemingly impossible for high schoolers.)

I’m looking forward to his character development. The only time I think I saw him improve is around the start of Act II. With the recent chapters, I’m still not sure if he’s undergoing an improvement or a regress.

Last but certainly not the least, Kominato Haruichi. He’s well-known as Harucchi as that is the name given him by Sawamura. It’s a running gag how Sawamura calls him “Haruo”, “Lucky Boy”, and other names, whenever he’s up to bat. At the start, he was just a pinch hitter, but he eventually became the second baseman. He admires his brother and desires to be acknowledged by him. (I love their relationship!) I love how he sticks with wooden bats despite circumstances that says he should stop. My favorite moments are when his eye is shown whenever he bats (well, this is much more frequent now on Act II) and when he raises his hand while blushing after hitting a ball and taking a base.

The rant I have regarding him is about the OP, ED, and posters that have him in the company of Sawamura and Furuya. Yes, he is a good support and player, but I never got the feel that he is as important as them as those OP and ED make it seem. I was so disappointed when I realized that he isn’t really that much of a main protagonist as compared to the the previous two and Miyuki.

With the way things are in the manga, I’m excited to see how he will show his growth as a player. After all, he surely does not want to lose to the other two.

And these are the three lovely boys. They are the Ichinen Trio but they aren’t first years anymore, though.