Most of the sports anime out there are shounen and most of the characters are bishounen. Thus, these anime series are well-loved by fujoshi fans. Even I myself have moments who ship these adorable guys with adorable friendships. I just loved the friendship (bromance, if you call it) during my earlier days with anime though. (Ah, innocence.) Most of my period of growing up is spent watching shoujo anime series, however, and I still love certain shoujo series, so I can’t help but still pay attention to the few female characters on these sports anime shows. I think they are less appreciated, especially that they don’t really have that much character development.

Here, I’m going to give them some appreciation. Or at least those which are on the series that I’ve watched or am currently following.

Miki is the manager of the Sohoku Bicycle Riding club. Even before entering the school, she already knew about the team members because of her older brother who was a previous member of the club. She is as passionate as the riders when it comes to bicycles, always supporting the team especially during official races. She’s seen attending to bicycle shop they own, too. Miki is also one of the first people who believed in Onoda. She is responsible for the race between Iwaizumi and Onoda as well as the one who got gears for Onoda’s mommy bike so that he will be able to use it for some racing. Ever since, she’s always been rooting for him. I kinda ship her with Iwaizumi, though, as they were childhood friends. (Kinda like AomineSatsuki.) 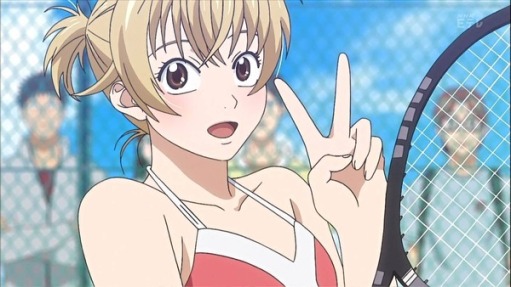 Natsu is a well-known, skillful tennis player who supports and motivates Maruo in his quest to the professional tennis world. Actually, knowing her became Maruo’s stepping stone to the world of tennis. Not surprisingly, Maruo supports and motivates her. Actually, he came to like her. (Spoiler [highlight to read]: And they became lovers eventually. I love their relationship with each other because they are the type of couple who don’t obsess over each other. They’re living their own lives, pursuing their own dreams while supporting  each other. They have a healthy relationship!) She may be that typical popular, talented, bubbly girl, but she isn’t irritating. She is honest with her feelings. Natsu also strives hard to improve her skills to be a pro, so she never cut corners even during practice. (Actually, all of them are like that.) I really need to catch up to the latest chapters of the manga to know what’s happening with her (as well as the others) now.

Karasuno High School’s volleyball club manager. She is quiet, hardworking, supportive, reliable, and is well-liked by the team members. She’s so loved, even, that Tanaka and Nishinoya has some sort of fan club for her along with Nekoma’s ace, Taketora. Oh, and Kiyoko’s so pretty that she attracts attention and makes other teams envious of Karasuno. She was actually a track-and-field athlete, specifically of hurdle sprint. However, she had an injury which put an end to her sports career. Now, she is doing great as the team’s manager, giving her all to support the team. I love how she has a good relationship with everybody, even Kageyama, and how she’s the reason why Asahi changed his way of tying his hair. (Though I personally prefer his bun over that headband.) She’ll surely be missed once she graduates. 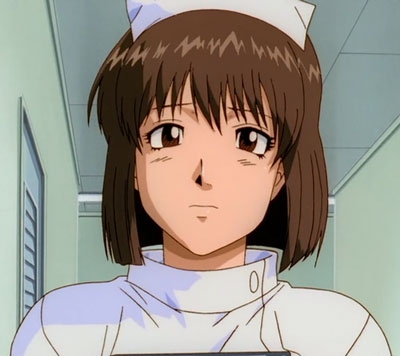 She is Mashiba’s younger sister and Ippo’s love interest. Kumi has become good friends with Ippo’s friends. Even if she didn’t understand the dedication of the boxers for the sport, she still continued to support her brother, and soon after, Ippo and his friends as well. I love the scenes when she’s flustered around Ippo, but I enjoy more the ones when his older brother is involved. It’s just so funny to see Ippo bear with her brother just to be with her.

Riko is Seirin High’s basketball club coach. Yes, still a student but already coaches a team full of adrenaline! Young though she may be, her experience from when she was a child while her dad was still coaching basketball teams helped her gain credibility as well as ability to coach the whole team. Like how the main players have a supernatural ability, she also possesses the ability to know the body statistics of someone just by seeing their naked form. (Because of her, there’s some free fan service.) She knows how to lead the team for them to be stronger and she also has good judgment during games. She has awful cooking skill, though. And a creepy but good coach of a father. Oh, but I love her relationship with Junpei. Those two are adorable! 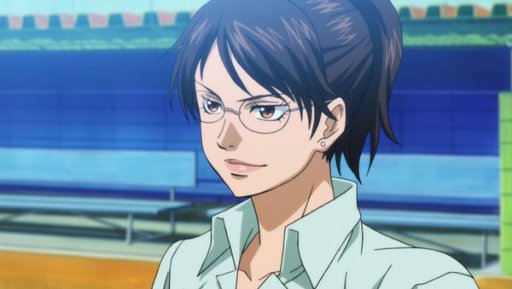 Rei-chan, as Miyuki calls her, is Seido High’s assistant director who also acts as a scout for baseball players from middle schools. She is a good judge of character and talent. She is responsible for scouting Miyuki (she’s one of the two reasons why he entered Seido!), Chris (though it’s just implied), beloved Eijun, and Tetsu’s younger brother Masashi. I bet she’s responsible for a lot more others playing there, too. She also cares a lot for them. She was seen frustrated when she realized that there was something wrong with Miyuki, but she had no means to know all that happens in the dugout. Now that I think about it, it could be a noona romance between those two. With like, 11 years age gap?

These 6 characters for now. There are more of them to come!

5 thoughts on “Roses in the Midst of Scorching Heat (Appreciation for Female Characters on Sports Anime, Pt. 1)”