Many anime series feature characters in pursuit of their dreams. It may be about playing in the Nationals (may that be tennis, volleyball, baseball, karuta, just every sport in high school), being able to be the best chef or pâtissière, or being able to have friends. No matter which area one is pursuing, it’s always heartwarming and inspiring (unless the character is so overpowered it’s frustrating) when we see the character improving and taking steps or leaps toward his dream.

What I’ll talk about in this post is this anime which I hold dear in my heart as it’s part of my childhood. It’s exactly that — a tale about one’s pursuit of her dream. This is Kaleido Star.

Sora, a young girl from Japan, comes to America in search of her dream. She wants, with all her heart, to be a member of the famous Kaleido Stage, a combination of musicals, acrobatics and magical effects. With the help of her friends, she struggles to make this dream come true. (source: ANN) 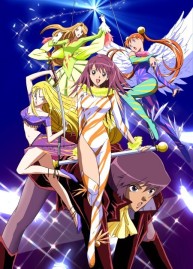 It is a mix of comedy, slice of life, friendship, tad bit of romance and drama, and fantasy in the context of a life involving lots of acrobatics, gymnastics, and other circus stuff. The 51 episodes is actually divided into two seasons. The first is episodes 1-26. Episodes 27 and 28 are recaps of everything that happened. Then, from 29 onwards is the second season.

Though the other characters have certain episodes dedicated for knowing them, the story is mainly about the difficulties and struggles Sora has to overcome to achieve her goal. First season shows how she wants to be acknowledged, to be able to perform on the stage. Second season, on the other hand, is where we get to the real talk about being the Star. The pattern is something we’re all too familiar with. The character struggles. Experiences some failures. Perseveres. Then, achieves. This may be what others will not like about this, but personally, I didn’t mind it because I enjoyed watching how Sora tried her best to succeed.

I also enjoyed it because it having to do with acrobatics and gymnastics. . Granted, the stunts are not all realistic but they still look pretty and amazing to me. Kaleido Star boasts of being the only anime which solely features that matter even if it aired more than a decade ago. Just with that, I think it’s worth considering to watch. It’s really Cirque du Soleil-like with less extravagant costumes and stunts. I loved watching especially the trapeze acts all throughout the series.

In addition, there’s theatre-related stuff here. The show does not really delve on the process of pre-, during, and post-productions, but I appreciate how there are instances when it shows how the production is conceptualized and materialized. The set designs are wonderful, too! I’m just not sure if most of them are feasible in real life. Anyhow, how the stages are designed contributes to how the performances are at least pretty to look at. If it were to have a reboot, I’m sure the effects could be breathtaking. (The two main performances at the end of both seasons still look beautiful to me, though.)

The story is set on America, so most of the characters have English names. This is also the reason why only few characters have black or dark hairs. I think it would have been nicer if Sora had black or brown hair, though. .

Speaking of characters, they are all loveable. Some may be irritating at first, but as the series progresses, their backgrounds and characteristics are shown, and it was difficult for me not to love them. There is quite a huge ensemble of cast here, Of course, Sora is undoubtedly the main character, but there are also influential characters which had their share of the limelight.

I enjoyed seeing these characters develop not only in terms of their attitudes but also in terms of their skills. After all, they do not just perform without any thoughts. They continue to learn with each production that they create.

First, there’s Sora. She is a vibrant character, always positive and ready to take on any challenges given to her. But she also has her share of times when she wants to give up. I think she is a good inspiration especially to younger audiences. I admit that she isn’t really my most favorite character here. I even had a period of time when I found her annoying for some reason. But a

Then there are her fellow performers-slash-close friends, Mia Guillem and Anna Heart. I actually loved what happened to Mia’s development. At first she didn’t stand out but eventually, her true abilities are shown. Anna, on the other hand, wants to be able to successfully deliver a “gag”. It’s a running gag on the show. Pun not intended.

Then, there’s Fool, the Spirit of the Stage who appears to those who are called to perform magnificently on the stage. He may look like a serious spirit, but he’s actually a pervert who never gets tired to voice out his suggestions with hidden motives, resulting to him being tied up or thrown out or whatnot by Sora. He also has some silly sides. Fool shows concern for Sora, too. He has the power to predict what happens to the future. In the first season, he uses tarot cards while during the second one, he uses a crystal ball wherein the characters’ zodiac signs are involved.

There are also Sarah Dupont and Kalos Eido. Kalos is the owner of Kaleido Stage and Sarah has been with him ever since they were still street performers. Sarah is the Madonna of the stage. She is a supportive and positive person. She has interests which you won’t expect will be in her character and this makes her amusing.

Ken Robbins, on the hand, is someone who has an interest with Sora. It’s amusing to see him blush and then be disappointed because Sora is oblivious of it all. It’s not clear what his position is, but I’m betting he’s a stage manager. Sometimes, he also helps Sora train and I like how he’s not cutting corners with it. Many times he is shown to be reluctant and too worried, but he still supports Sora.

Then, there’s Rosetta Passel, a diabolo prodigy. At first she has a terrible attitude, but she turns out to be sweet and strong. Marion Benigni, meanwhile, is a child of a former star trampolinist and a set designer. She was hostile to Sora at first, but like Rosetta, she warmed up to her and others. (Now that I think about it, aside from Sarah, Ken, and Jerry the Mr. Policeman, Sora didn’t start a good relationship with others.) I love how she eventually synced up with Jonathan the seal. Though it’s really unrealistic for Jonathan to be able to “laugh” at jokes, still, I find them adorable.

Now, if we’re going to look for antagonists, there aren’t any really. There were times when Sora was hindered because of such and such people, though. I may say Layla Hamilton, Yuri Killian, Leon Oswald, and May Wong. But all these four didn’t really stand in her way for long. Mostly, her struggle is within her own, because of her lack of training and such. It’s interesting how much important Layla’s character is, though. She’s been with Sora from season one and even in season two, she has an important role.

Oh, and I just want to mention how I love May. Her attitude may not be the most pleasing at first, but after knowing who she really is, she can be likeable. She is passionate, never easily gives up, and really competitive. She shows her kindness and concern in her own way. (May reminds me of Meilin Li from Cardcaptor Sakura. Not that Meilin has random names for the moves she can do, but it’s slightly in their attitude.)

Now about the more technical aspect. Gonzo (Full Metal Panic!, Special A, Black Cat) and G&G Entertainment (Ragnarok the Animation, Kirarin Revolution) are the studios that handled the animation work. The animation is not really that smooth. When I was making the GIFs above, I realized that they were able to make the moves look good because of the speed. But I still applaud this because they were able to make some moves/scenes notable (especially the ones on the last episode!). For an anime shown in 2003, I think the quality is good.

With regards to sound and music, there is appropriate sound and music for each scene. Nothing stands out to me, though, except the three OPs — Take it Shake it (Sugar), Yakusoku no Basho e (Yonekura Chihiro), and Tattoo Kiss (r.o.r/s). I even talked about Yakusoku no Basho e here. Anyway, these three songs’ melodies and lyrics resonate that hopeful chasing of a dream which is the central theme of the series.

Kaleido Star is not flawless, but it definitely has strengths — the ability to inspire, it being a rare acrobatics show, and mostly likeable characters — which make it worthy to check out.

One thought on “「 Kaleido Star 」 To That Amazing Stage!”