Have you ever shipped two characters who you just know will be together by the end but take a long, loooong time to get together even if their feelings are mutual?

I have. And it’s just frustrating!

One of those pairings that I have been waiting for to be together is Detective Conan‘s Kudo Shinichi x Mouri Ran.

The series started on that day the childhood sweethearts went to Tropical Land.

Perhaps one of the factors why I’m frustrated is because Gosho Aoyama-sensei can actually write good love stories, as seen by some stories on some cases. Inspectors Takagi Wataru and Sato Miwako also have a pretty good romantic development themselves, if you ask me. As with some others (Sonoko, Shiratori, Chiba, etc). Then again, Shinichi’s problem — shrinking and all — is the main cause of the delay, I guess.

Many holidays, birthdays, morbid and not-so-morbid cases has passed. It’s already 2017, nearing 2018, and dear Conan is still a first grader.

With more than 1000+ chapters and 800+ episodes, we’ve only seen a few times when Conan actually turned back to Shinichi. The other times are even flashbacks. With the series’ floating timeline, there’s a lot of time that passed ever since the last development. Anyway, I made some kind of timeline of some happenings though it’s not exhaustive.

Actually, even with the two of them apart (at least mostly from Ran’s part?), their feelings are still strong for each other. Many times Shinichi as Conan saved Ran from trouble, even at the expense of his own life. Ran thinks a lot about Shinichi, too. Both get reminded of the other even in littlest things. They’re both just usually tsundere about their feelings for each other, but they’re so obvious that people around them knows the truth even when they deny it.

Anyway, when the manga hit the 1000th chapter mark, Gosho-sensei graced us with the return of Conan as Shinichi for their trip. Ahh, the trials Conan had to endure just for Ai to give him some of her antidotes. While on the trip, he also experienced lots of challenges because of the limited time of effectivity of the said medicine. Anyway, as usual, they got involved in a murder case. Somewhere along the way, Ran and others encountered Okita Soushi and they had this scene.

Sonoko, being that lovely friend, snapped a picture of the two and sent it to Shinichi who, of course, got bothered by it.

Jealous Shinichi is so adorable! Because of his jealousy, he finally confronted her and asked that question that not only him but the whole Detective Conan fandom has been waiting for to be answered! 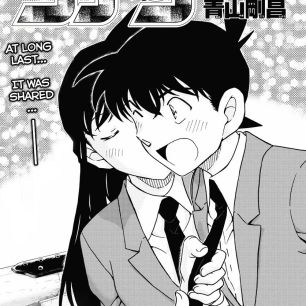 Yes, yes. As someone in Tumblr pointed out, Gosho-sensei gave this scene to us four times. FOUR TIMES. From four different angles! And, of course, he’d like for the other characters to see this moment, too.

Finally, in that historic chapter (1004), there goes the answer. Given to us four times. I thought we’d have to wait till the last chapter, but it’s great that Gosho-sensei thought otherwise! He made the couple official before what feels like the beginning of the end of the series!

See? IT’S FINALLY OFFICIAL! HOORAAAAAY! (Now, Heiji, who noted that Shinichi has set the bar high, should do his best with his confession to Kazuha.) It’s amusing how ch1008 is entitled “See! ♥” (though there’s really something more to see in that chapter), as if to assure the readers again that it’s not a dream. 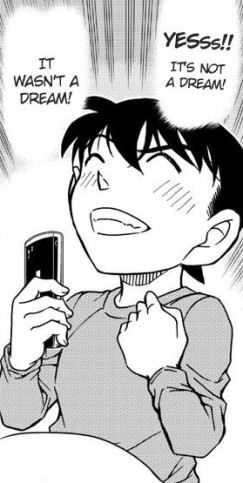 Uhhuh. Now I’m looking forward to how things will develop. Personally, I’d like for Ran to know the truth about Shinichi, about the existence of the Black Organization. There’s danger in knowing them, yes, but I’d like for her to be aware of this great peril that her boyfriend is facing. She may be able to help in one way or another, too. If I were her, I won’t like to be kept in the dark. I hope she finds out the truth soon!

For now, as Gosho-sensei is on hiatus, I’m going to read/watch the parts I skipped (because I prioritized reading/watching those which serves to advance the plot). With the last chapter being like that, I’m so hyped to see what happens next! There may be more actions from the Black Organization, Amuro, Akai, and Sera! Plus Yukiko and Yusaku are there! (I just love it whenever they appear.) YAAAAAY!