Before Haikyuu, Giant Killing, Ookiku Furikabutte, and Daiya no A, I was into this popular series that many anime viewers must know — Kuroko no Basket. I enjoyed the thrill of games as Seirin High took down each of the teams where a member of the Generation of Miracles. I loved each of the members of Seirin and the Generation of Miracles along with their new partners. I had fun while I was following that series. Even if I know that they’re all overpowered because of those crazy powers, even if it’s funny how they’re color-coded to almost make a rainbow, what matters is that I had fun.

But I got to know and follow series like Haikyuu, Giant Killing, Ookiku Furikabutte, and Daiya no A. I found myself enjoying more semi-realistic/realistic sports anime/manga series. So, my love for Kuroko no Basket was kept in the cabinets along with my love for Prince of Tennis and other shows I used to love.

Recently, I discovered that they released this movie entitled Kuroko no Basket: Last Game early this year. It’s based on Fujimaki Tadatoshi‘s Kuroko no Basket: Extra Game. It’s still animated by Production I.G, so the quality is the same with the series’. The seiyuu all reprised their roles, too. 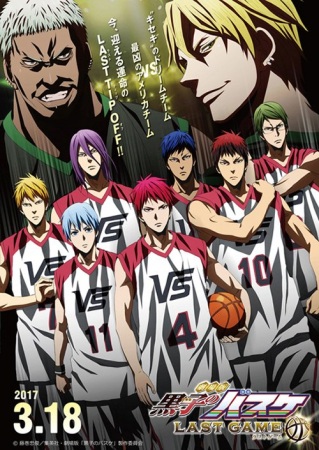 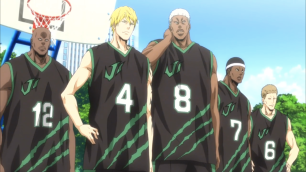 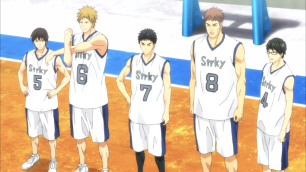 What should have been a fun event, though, became a disaster when Strky ended up badly losing to the nasty Jabberwock. The foreign team ended up insulting not only their opponents but all of the basketball players in the country. Furious, Kagetora proposed a revenge match against them. Having the same sentiments, these guys gladly formed a team together — the Vorpal Swords.

After the three seasons ended, I felt bad that the Generation of Miracles would not be able to play together anymore. I guess Fujimaki-sensei thought that some fans would feel that way, too, so he gave us one extra/last game.

It’s really amazing to see each of them gathered together once again, with Taiga looking as if he was with them in middle school. Hyuuga, Wakamatsu, and Takao are actually called as well, but those 7 are the main force of the team.

There’s just some practice shown and the game against Jabberwock is eventually presented. Not much time for introductions and the game starts. Watching the game didn’t give me the feeling I felt watching the series. You see, the feeling is caused by knowing that the members of Generation of Miracles are way above normal than their team mates and most of the members of their opponent teams. I just don’t know what to call this feeling. Anyhow, I didn’t feel it because I know that Jabberwock players are just as insanely powerful as them. It’s a game of overpowered players.

Vorpal Swords struggled but with Kagetora’s help, they were able to do some countermeasures. These countermeasures allowed us to see the different combinations of the 7 main players. (Yes, Hyuuga, Wakamatsu, and Takao just became bench warmers and I’m a bit disappointed because of that.) We got to see Kise and Aomine, Murasakibara and Taiga, Aomine and Kuroko (!!!), Midorima and Akashi, and the likes working together. 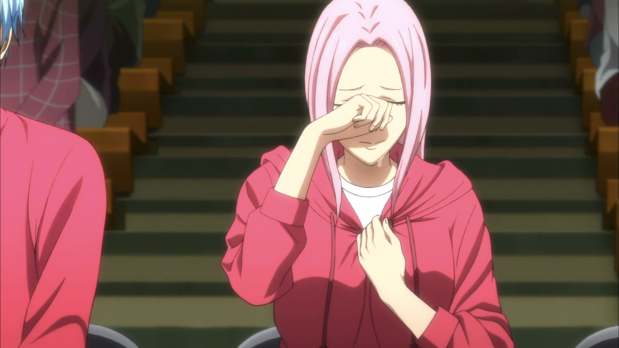 As they’re mostly members of Generation of Miracles, it’s great to see the difference of then and now. They aren’t self-centered players, anymore. They actually played together, putting their abilities together as a team.

Still, though, they at least got each of their times to shine. I have a lot of feels for Akashi’s because it’s what made me feel that this is really the last.

The conclusion of the game is as anyone would expect if would be. It’s satisfying how it led to that, but at the same time, it’s also sad because it’s the last we could see of them together. (Oh, but it’s disappointing and frustrating that the Jabberwock didn’t even apologized for the insults they threw to the players. Especially that irritating Silver.) The end of the movie is a bit more dramatic, most probably because it’s, well, the end of it all. However, it’s still on a good note. It’s a good closure.

By the way, the ending song is by GRANRODEO entitled “Glorious Days” and Ono Kensho (Kuroko’s seiyuu) has an insert song there entitled “Against the Wind”. Between the two, I prefer the latter. And it’s also well-timed in the movie.

The seiyuu performances are superb, of course. They’re actually my primary motivation to watch this movie. I just love all of them, especially Kamiya Hiroshi. Oh, but his Engrish is hilarious. Others’, too! Even those which are supposedly from America spoke Engrish.

In the end, I can say that I had a lot of fun. I laughed a lot. Because of their team names (seriously, is it just me or are the three team names really funny?), because of their Engrish (I’m not making fun of those which aren’t fluent in English, though), because of genuinely funny moments. It was fun seeing these characters again. Even more so because I thought seeing them all play together again would be just a dream. (Thanks, Fujimaki-sensei, for making this dream possible!)

Even if I’ve already went on to love other series and even if it’s not the best, I’m sure this series will always bring a smile to my face whenever I look back and remember the characters and their moments. These guys will always be loved.