Boku no Hero Academia‘s recent chapter is so heartwarming that I want to share my feels here before the new one is out. IT’S. JUST. SO. ADORABLE.

The story continues on as the kids are preparing to charge at the young hero hopefuls. They actually didn’t waste time to prove what they want to do. 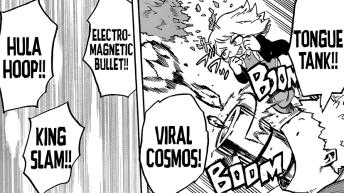 See, they’re all so courageous. They are all so confident that they are greater than the hero students. They even believe that they are better than any other pro hero out there! (By the way, they have so much amusing quirks. Hula Hoop? Queen Beam? So cute.)

You know it’s amusing how the kids mirror young people’s thinking. Some young people, honestly even I at times, tend to think that they are always on the right. That what they know or have is better than what the adults say. It is difficult to get through to them because they are proud and will not listen to what others say unless they are proven wrong.

It’s also amusing how at times, I think very much like Present Mic here. Many adults also tend to think or say something like this, too. I’ve heard it a lot of times from different adults, strangers and relatives alike. Even some say this on various pages on the Internet.

Funny how even if I myself am not that old, I’d like to think that kids these days are so different. Many have their own smartphones at a young age when I didn’t have one until when I was about to enter high school. Many also don’t play games outside anymore because they prefer to play with their gadgets. Or at least I’m observing kids from middle and upperclass families.

Anyway, of course, our hero students here won’t give up to get their provisional license. They planned to use their quirks in a way that will both prove themselves to the little kids. Personally, I thought the combination of those four — Inasa, Camie, Todoroki, and Bakugou are odd. But they actually make a good team here!

shoujo!Todoroki here for you~ *hearts*

First to show these kids what they’re made of is Camie, whose quirk is called Glamour. She can create illusions like this one above. I was so surprised at it that I actually thought that it was Todoroki! She fooled me, too!

<– This is basically my reaction, too!

This girl is the one who expressed her hate for Camie when they were introducing themselves. It’s quite amusing to see her be like some younger kids who are in for some prince charmings. (Well, Todoroki is basically a prince riding on his white horse in S2’s ED2.)

Camie quickly vanished the illusion, though. By the way, this resulted to Bakugou being like this.

It’s really surprising to see Bakugou like that! You see, he’s usually hot-tempered and aggressive, right? He smirks, scowls, and glares. He shows indifferent looks. Though he can be serious, too! But it seems like the genuine times we’ve seen of him actually smile is during those flashbacks of his childhood, before his violent growing up phase. Yes, we’ve seen him laugh at times, but those are maniacal laughs. This, here, is one genuine laughter. And I’m just so happy for him.

Right after reading this scene, I got a feeling that a new ship will rise — Camie/Bakugou. I think it will be interesting to see them interact more, and for now, I’m loving the effect Camie has on him. I think they’ll be good friends! 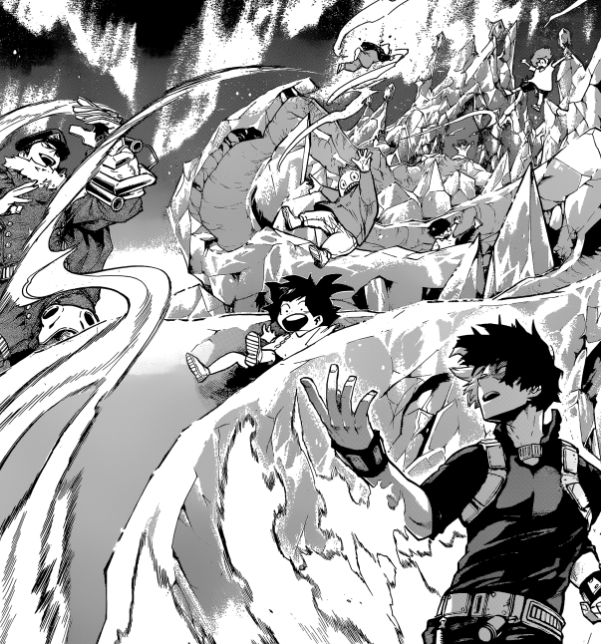 Anyway, after that, they did this for the kids. A big slide made with the help of the quirks of the kids and the four trainees. It looks beautiful! I’d certainly love to see this animated! And, naturally, the kids loved it! The four managed to make the children change their attitude and opinion of them while they are having fun.

Shouto’s so cute there, telling the kids to line up

Present Mic said it so well when he stated that the plan makes you feel all warm and fuzzy inside. Though kids may be a pain in the butt at times, there will always be that type of charm when they warm up to you! It’s also nice to see other people who aren’t even fond of children get close to some.

And here is Bakugou. Getting that Monoma-look-alike to participate. Bakugou, who used to refuse being involved with such activities, is making this kid do so. This is because he experienced being like that kid.

He looked down on people and he experienced the consequences of it. Bakugou failed. He got hurt. And he learned from it. So, now, he’s giving an advice to this kid because he doesn’t want him to experience what happened to him. And I think this is pretty heroic of him. 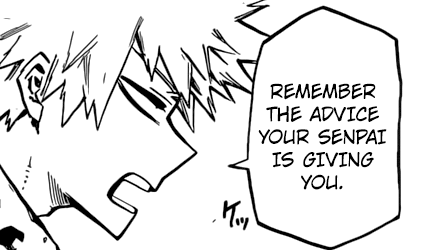 I’M SO HAPPY FOR HIS DEVELOPMENT! cries

I know some people may not like him that much because of various things, mainly his tendency to violence as well as him bullying Deku before UA happened. But I think we can cut him some slack because while he’s a 16-year old teen, he’s still growing and changing. The various circumstances he’s experiencing in this stage are rapidly molding him into someone who can actually be the people’s hero.

Anyway, I find it so cute that Bakugou calls Todoroki by name. Though I probably shouldn’t be surprised at all, since he only calls people by name if he acknowledge them and Todoroki is surely someone Bakugou sees as a rival.

Anyway, thanks to Bakugou-senpai, Monoma-look-alike teared up as he got touched by his heartfelt words. Between empty flattery and heartfelt rebuke, one would usually prefer that rebuke.

So happy for you, little girl. You actually got him to show you his fire quirk upclose.

And there, Endeavor watched. He’s seeking what it means to be a symbol of peace now that he is considered the No. 1 Hero. I really disliked him at first. He was so not a father figure, especially to Todoroki. He was not such a nice husband, too. But that dislike kind of lessened a little when he asked All Might that question. He is struggling and is finding his own way to be a hero for the people.

That look on his face may mean a lot of things, but I think he’s reflecting a lot in this arc. He may be thinking about all the things he did and did not do as a father. I’m interested to see how he will develop from now on.

That’s one hilarious illusion and I’d love to see Todoroki’s facial expression while he’s looking at them!

And I really love how enthusiastic Inasa is about everything! Ahh, I’d like to see that blast wave roller coaster as well!

Now that they’ve accomplished their mission, I’m excited to see how things will develop from here. After a lighthearted arc, I’m quite sure that things will turn to the serious tone again. I’m so stoked for the next chapter!