The new chapter is actually released this 20th, but the scanlations for 154 was up only recently. Anyway, chapter 154 (“Things to Worry Over“) is a lovely chapter for me because it not only have the Dark Dragon and the Happy Hungry Bunch, but also Lily, Soo-won, and Tae-jun!

The chapter starts with the DDHHB talking about going back to Kuuto. The dragons’ regeneration is slow because they are away from the Hiryuu castle. They’re better now, though, so they can finally travel.

Zeno explains that their regeneration being fast when they are in Hiryuu castle is because of King Hiryuu’s shrine being there. It shows just how much deeply connected Hiryuu and the dragons are. 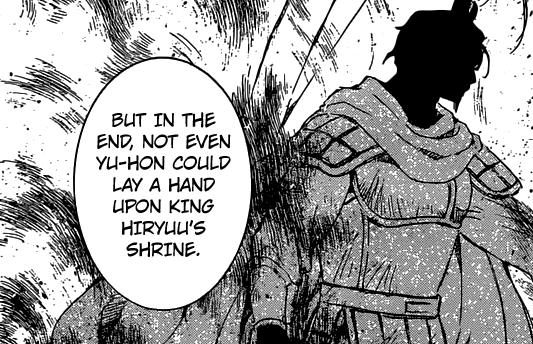 Interestingly, Zeno mentioned that not even Yuhon was able to lay a hand on that shrine. I wonder just how much power Hiryuu has and how much of it affects Yona, knowing that she’s his reincarnation. Yuhon continues to be this man surrounded by mysteries. What kind of man is he really? What kind of education did he give Soo-won that he grew up with such motivations (his stance still vague)? There’s just so much question about him! I still have questions about the truth of what happened with Yuhon’s beheading of people of Xing. 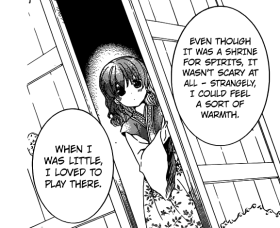 Another mystery is King Il. It’s the first time he’s given a panel with such a scary expression. Yes, he was adamant on letting Yona marry Soo-won, but apparently, that also happened — King Il not allowing Soo-won to set foot inside the shrine. Obviously, King Il knew that Yona is King Hiryuu’s reincarnation. But what did he know about Soo-won? Why couldn’t he be there? And did King Il met some of the dragons? Ki-ja mentioned that they used to visit that shrine before. That means that some other people may have went in there. But why wasn’t Soo-won allowed? There’s so many questions!

Then, we get a Hak x Yona moment as Yona, who was lifting a tower of clothes, tripped on Hak who was tending his bruises.

Yona offered to put the bandages on him, but I bet he struggled with his urges so he caught her hand and told her to stop It’s such a sweet and cute scene especially now that she’s aware of his feelings! Her answer to his confession may be stalled, however, because of the scenes brewing up.

The scene cuts to Kuuto, to the pub ran by the old man Ogi. Poor man, he misses Soo-won a lot! He got excited knowing that the ‘one he’s been waiting for’ came, but was disappointed to see that it’s Lily.

She spots Yona’s hairpin and the two engaged in a conversation about Soo-won, as she asked if he knew about it. Ogi confirms it and said that it’s probably the reason why he hasn’t been coming there.

Ogi believes that Soo-won not visiting is because he wants to protect Ogi. I’m quite sure that that’s really the reason, too. They have been in a good relationship since Soo-won was young, so I’m sure Soo-won also values him. It’s just touching to know just how much Ogi loves and cares for Soo-won, too, though. Lily is even amazed that there’s someone who loves Soo-won so much in spite of the things that happened.

This made her promise that she’ll deliver news about Soo-won. And just look at Ogi’s reaction! That’s gratefulness there! Ogi’s ‘thank you’ with a panel of his back is just so bittersweet. And, ahh, Lily is so sweet! I really love her for being able to be a close friend to Yona as well as to Soo-won. She’s like a bridge of those two. She’ll probably be able to be the first one to have the better grasp of the situation between those two parties as she have a good relationship with both of them. So far now, Soo-won’s still a mystery, but I’m guessing Lily will be able to know more about him soon.

The story, then, turns to the Hiryuu castle. Lily is finally there and she sees Soo-won enter a room and she follows him.

Apparently, it’s the shrine room for King Hiryuu. We get an information about how some people of Kouka practice their religion. And we know that religion is important element of this series as they believe in gods and reincarnations. And there are actually the reincarnated Hiryuu in Yona and the dragons.

Anyway, that scene ends with Soo-won realizing that that is “all there is to it” before the scene shifts to Saika Castle where furious Kyo-ga is grilling Tae-jun because of the lit beacon of the fire tribe.

The lit beacon means that Kai empire is invading, but as it is, Tae-jun just did that to stall the Sky tribe from advancing to Xing, as per Yona’s request.

I’m still in awe by how Tae-jun is willing to go lengths for Yona’s sake. And I’m still in love with how much development happened to him. I’m just so proud of this guy that I can write a whole other post just appreciating his character! I’ve read some posts saying that they support Tae-jun being the next king after Soo-won and I’ll have no complaints if that’ll happen. Tae-jun was raised with the thought that Hiryuu is actually from the Fire tribe and they took pride in it. With Tae-jun being more humble and concerned now, I think it’ll be a nice treat if he’ll be able to take the throne and lead the country. 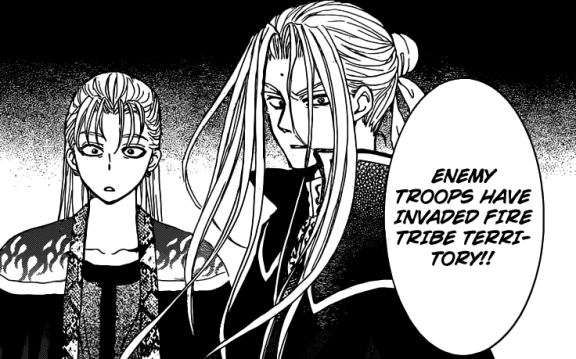 But for now, they will have to face this trouble. It became somehow an easy way for Tae-jun. (I’m quite sure you’ll regret ever wishing about this earlier, Tae-jun.) I hope that Li Hazara isn’t the one behind this, though. Soo-won already went to Kai to expressly warn them. If he is, I’m quite confident that Kusanagi-sensei will be able to deliver a proper story arc. (Please don’t hurt my dragons anymore.)

Indeed, there are a lot of things to worry over in this chapter. The new story arc is going to be exciting! I’m just sure of it!